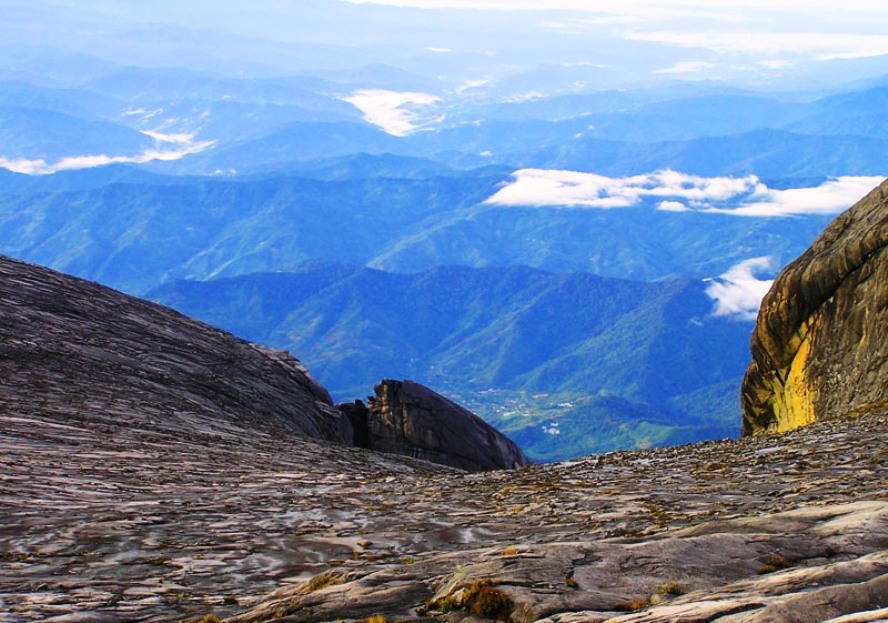 Can’t help but re-post this particular entry done way back in 2008.  I say this is “victory” because I thought I’d never make it to the top of Mt Kinabalu at 13,455ft, South East Asia’s highest,  but I did. What you see in this picture may no longer be a true representation of what you will see of the mountain or its surroundings today, after the 5.9-magnitude quake that rocked the state’s west coast on June 6, 2015. But, “forget the sad times. This week, it’s all about revelling in a win.”

Made it to the top of Mt Kinabalu in Dec 2003.  Yes, some 5 years ago.  While getting my certificate, I remember making a defining statement, “ this is my first and the last ….” .  Honestly, I have actually wanted to make another attempt to conquer the mountain but… don’t we always have that ‘buts’?!

It was already drizzling when we started our trip and boy! rained it did … all the way!   Yes, was soaked wet and I had ‘fun’ watching people passed me by or watching 1 or 2 sitting looking  tired along the sort of never ending trail up!! Along the way, we passed by Carson’s fall, a crsytal clear waterfall, Radio and TV stations, trails shelters – 6 of them.  As we passed one shelter after the other, I was distracted by the sight of different forest neigborhoods – so rich with a variety of plants ranging from ferns, berries, and some other weird otherwise beautiful plants!  The higher we climb, the smaller the plants became.

The trek up was of course undeniably tiring as we had to climb up a series of steps. Every time I bumped into someone, I’d asked this ‘important’ question, “how far along til the next shelter? ?” And the reply was always, “not far. It’s just over that corner”.  At that point of time, what motivated me to keep on going was the cool serenity – absolutely pollution-free air!

I think we walked more than 10 hours before reaching the overnight lodge at Laban Rata Resthouse.   Eventho’ dead tired, I was adamant in wanting to reach the peak.  Sleep that night was minimal since we had to wake at about 2am to start the other leg of the journey.  I remember thinking, “what if I fall asleep while walking??

After having a cup of coffee and something to munch, we started our climb up!

The climb up to the summit was slow, I was slow!  When a few other people overtook me, I was beginning to doubt my ability to reach the top.  With my boss and a few others, we were the last few to reach the summit. We were playing safe – better late than never sort of.  Quite a number didn’t make it to the top. We reached the summit just before 8am, we were told that it was ‘late’ but OK. I groaned the sign of relief. Took a couple of minutes just sitting sitting down enjoying the truly magnificent views from the top! After taking some pictures, we had to descent fearing the mountain being enveloped by clouds.

Now, my way back to Laban Rata was not pleasant. I tripped and hurt my ankle. It actually got worse while making our way down. I was walking real slow, yup holding a stick to support me.  Initially, when one of the guides offered to “carry” me, I declined. However, after walking some distance, my colleagues suggested that it would faster if the guide carried me instead! Well, I had to agree as it was already getting really late!  So, there I was, being ‘carried’ by the poor guide!  Yes…he was fast, almost running which of course scared the heck out of me!  What if he slipped?  Anyway, it was a good thing that I agreed, otherwise we would have reached the check-in point much later that night.  The guides were real patient and considerate. Can’t thank “Nelson” enough for carrying me all the way down.

So what did I learn out of this trip?  Nothing can beat us as long as we are determined!