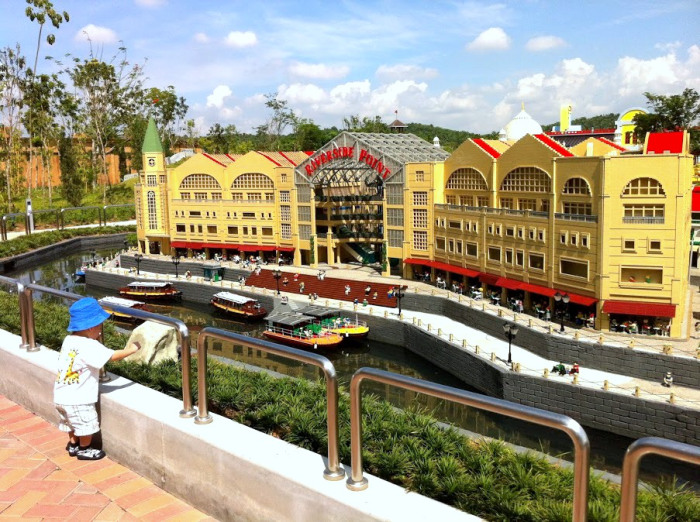 Legoland Malaysia is probably the most talked about park of late, the fact that it is new. Niece did warned it was hot out there!   The moment I stepped out of the bus, I felt the scorching heat instantly!  Even an umbrella or a cap didn’t help! The park is new, would take a while for the trees to help at least shade the area. Many would definitely give a thumbs-up for this park, it is uniquely beautiful.  It’s been reported that the park, ever since it opened in Sept,  has so far, been getting huge crowds, one can easily see why.

Some pictures to feast your eyes!

Buddhist temple on the Chao Praya river in Thailand, Its name means “temple of Dawn”. Built in the 19th century, it is built with seashells and porcelain.

An hour into the walks around miniland, all I could think of was rush to nearby shades. We spent like  more than 2 hours at the restaurant – for lunch and to “recuperate” from the heat.  There were others like us, soaked wet in sweat and just wanted to sit for hours.

Slightly after 3pm, lo! a total change of weather. it drizzled! Boy! did I hear everyone’s sigh of relief! Ha! just kidding 🙂 BUT YES, I was totally  relieved!  Then, I was able to enjoy the miniland more ( I like this section the most).

Buddhist temple on the Chao Praya river in Thailand, Its name means “temple of Dawn”. Built in the 19th century, it is built with seashells and porcelain.

Karaweik Hall, Myanmar – A gigantic barge on the shore of Kandawgyi Lake in Yangon, Myanmar. “Karaweik” comes from a mythical bird. Inside is a large restaurant where guests can see crafts and dances.