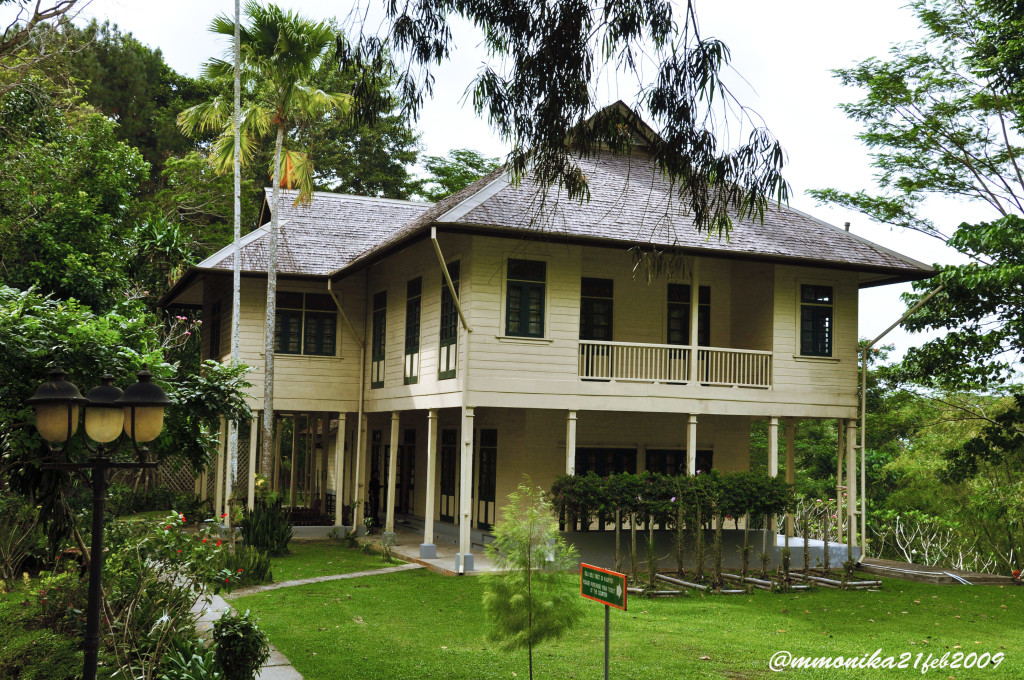 The entrance  to the house compound

After several failed attempts, I finally visited Agnes Keith’s much talked-about historical house! I totally love the green surroundings!  Ian and his cousins were obviously excited because of the fact that they were going somewhere I guess.

Love the view from this house –  inspiring views of the greens, Sandakan Bay and the Sulu Sea. Comparing with the illustrations of the house by Agnes in her book, White Man Returns, the basic design of the house still remain intact –most features are still there.  I especially love the long French windows – they make the house look so ‘windy and roomy’.  It felt somewhat eerie connecting what she related in her books with that of the surroundings. If you have read her books and love them, then you must visit this place. It’s more meaningful.

Agnes was an American writer who had lived in Sandakan (Sabah, Malaysia) with her English husband, Henry George Keith,  between late 1934 and early 1952. During these years, she wrote a trilogy on her experience in this exotic land:  Land Below The Wind (1939), Three Came Home (1946) and White Man Returns (1951).  Except Three Came Home, the other two books were written in this house.  Infact,  Three Came Home which was focused on hardship suffered in WW2 was made into a Hollywood movie.

Agnes’ house provides remarkable insights to life during British North Borneo.  A gallery which is situated on the first floor tells the story of her life, the books she authored as well as her as family.

The front door is right under this beautiful porch.  When you open the door, what greets you from inside is a wooden staircase in the middle which leads up to the book-room.  Can’t recall from my readings but I imagine this was teh room where Agnes did most of her writing work!

If you can recall from your readings, her servants include her housekeeper, Ah Yin, other Chinese domestic helpers, Ah King and Ah Kau and Murut houseboy, Arusap?    They lived in this little house (the servants’ quarters)  down a small hill slope.

Those who love history, this place is worth visiting!